Sound of the Netherlands: Crowdsourcing the Dutch Soundscape

Sound of the Netherlands: Crowdsourcing the Dutch Soundscape

1. Introduction
The impact of user engagement practices in the GLAM (Galleries, Libraries, Archives, Museums) domain on work processes is becoming profound. Initiatives today aim to have long-lasting effects on the way institutions are operating. For instance, users are being challenged to add tags to collections, help with transcribing historical texts, share contextual knowledge in collaborative wiki environments and so on. These initiatives are becoming more commonplace now and are beginning to form integral part of day to day operations at GLAMs across the globe. One of the key success factors of these practices is shaping and executing them in a way so that both the users as well as the institutions find them beneficial. Oomen and Aroyo (Oomen 2011) have clustered the different Crowdsourcing models and created the following classification of six types of crowdsourcing. See Table below.

2. Sound of the Netherlands

This MW2013 demonstrator falls under Complementing Collection. ‘Het Geluid van Nederland’ or ‘Sound of the Netherlands’ ( http://www.geluidvannederland.nl) makes a sound archive from the collection of The Netherlands Institute for Sound and Vision available to a wide audience. The total collection contains over 10,000 sound recordings from the 1950s to the 1990s, showing the evolving soundscape of the Netherlands. Sounds include horse driven trams, street vendors and recordings from the ‘Eleven Cities’ (‘Elfstedentocht’) ice skating match.
Since the service launched in September, it added approx. 200 crowd sourced sounds to its repository of 2,100 sounds from the sound archive of Sound and Vision. They are available through a ‘sound map’ (Figure 1). This interface provides an overview of the national coverage of the sound archive, both in space and time, and is used to encourage users to add their own sound to complement the archive. 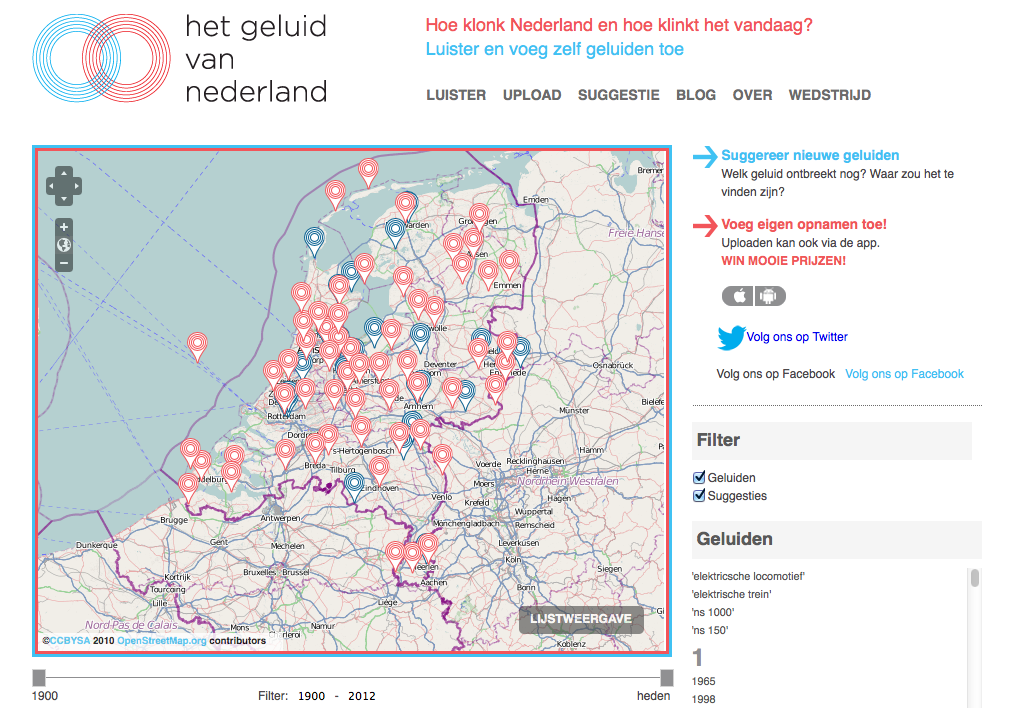 We approach field-recording communities and other interested parties and invite them to contribute to the project by uploading their sounds. Sounds can be uploaded directly through the website. To this end, Sound of the Netherlands makes use of the infrastructure of SoundCloud, a widely used social music sharing platform. We have created an interface that makes it straightforward for users to upload their sounds. (Figure 2)
All contributions are available under either a Creative Commons – Attribution-ShareAlike (CC BY-SA) or a Creative Commons – Attribution license (CC BY). CC BY gives explicit permission to remix and distribute sounds, as long as the creator of the recording is mentioned. CC BY-SA also has this requirement, and adds to this requirement that results of remixes are made available under the same license. 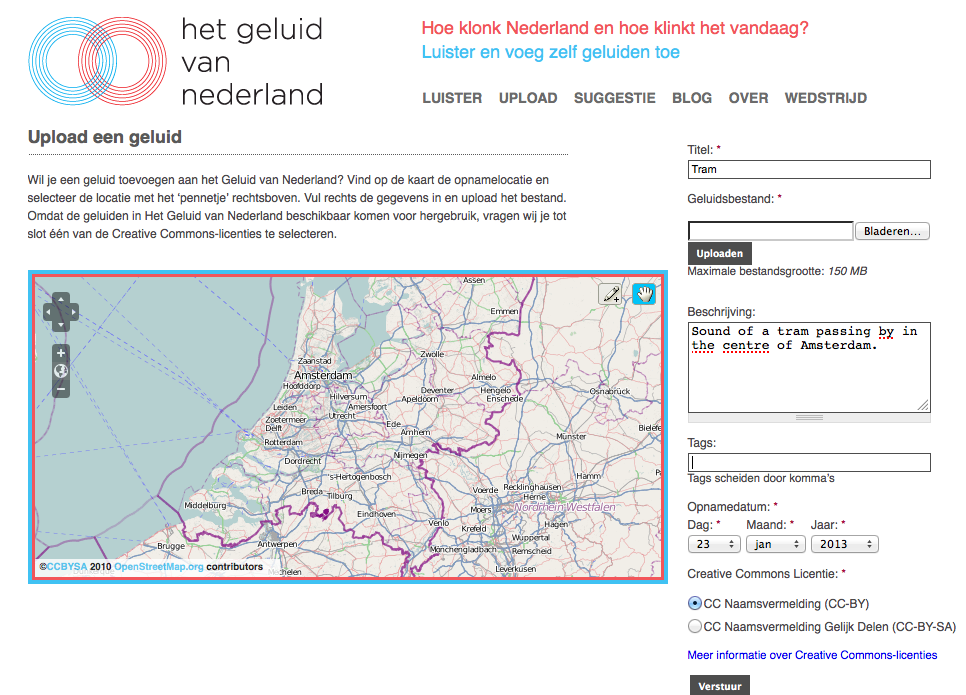 Next to the web-based upload interface, users can use an iOS/Android app created for the project called Soundhunter (figure 3 and figure 4) that allows them to create field recordings and upload them directly to SoundCloud. It allows user to add metadata and also to attach a Creative Commons license.

Figure 3. and 4. The Soundhunter app.

3. Attracting the crowd
Crowdsourcing sounds doesn’t come without significant effort to (A) create awareness of your service and (B) activate relevant communities to add their existing and newly recorded sounds to the repository. Since sound is a relatively new type of asset in GLAM crowd sourcing (at least in the Dutch context), the project got extensive coverage, especially on radio and other mainstream media.
That same novelty factor made finding and activating communities of prospect contributors more laborious than expected. There are numerous communities of ‘sound hunters’ and field recording enthusiasts, but we faced three types of challenges in getting them to contribute. They proved to be unaccustomed to adding sounds to a historic archive, under the aforementioned Creative Commons licenses. But even if these communities or individuals were positive towards the idea of opening up their sounds and contributing to the project, in most cases their historical sound archives were not digitized yet and/or lacked sufficient metadata. We aim to work on this in future projects.
What helped to attract users to the platform was our range of activities and competitions.
Together with the STudio for Electro Instrumental Music (STEIM), three workshops# were organized around appealing themes such as ‘subtle listening’ with San Francisco-based artist Kim Cascone and ‘processing found sound’ with Robert Henke (a.k.a. Monolake) from Germany. All workshops were fully booked and delivered sounds of impressive quality to the platform.
Although less significant in terms of delivery (27 submissions), three competitions (Best Sound logo, Best Musical Production and Best Contributed Sound) yielded interesting and creative results. The Best Sound logo competition was supported by the music & technology magazine Interface, which added to the visibility and thus awareness of the project.
Lastly, Sound of the Netherlands partnered with Jameszoo (http://jameszoo.com/), a rising star on the Dutch electronic music scene. As an ambassador, Jameszoo was jury for the contests, helped make a video promo and will produce a track based on the archive and newly collected sounds.

4. Impact and use of Sound of the Netherlands.
A significant number of users have uploaded sounds to the platform and we are currently (January 2013) defining our strategy to foster the existing user base and at the same time ensure it will continue to grow. Using SoundCloud as the underlying technical infrastructure has proven beneficial. It allows us to focus on approaching communities (through competitions, workshops, use of social media and so on) and not invest resources on creating a custom backend infrastructure. SoundCloud offers fine-grained statistics. For instance we know that over the past six months, on average each track was played 14 times.
The dataset has also been repurposed in new applications for instance the Mix of the Netherlands (http://www.betweencurlybrackets.nl/MixvanNederland/index.html) and Sounds Visual (http://www.opencultuurdata.nl/2013/01/sounds-visual/). The first (figure 5) allows users to make a remix of the collection of sounds. The latter (figure 6)  explores visual alternatives to textual tags. Users make drawings that represent the sounds. They are subsequently used as access points to the sounds. Both are created outside of the scope of the project, by third parties. It showcases how open access to these resources support new and creative services.

The coming months, the partners will continue to attract communities to upload sounds. Also, we will collaborate with the British Library and Historypin in the context of a EU funded project Europeana Creative (http://ec.europa.eu/information_society/apps/projects/factsheet/index.cfm?project_ref=325120). These combined efforts will lead to a pan-European collections of sounds.

5. Aknowlegements
Het Geluid van Nederland is a project by the Netherlands Institute for Sound and Vision, De Auditieve Dienst and Kennisland. The collection that is made available has been digitized in the Dutch digitization project ‘Images for the Future’. Het Geluid van Nederlandis made possible through the financial support of Stichting Doen and the BankGiro Loterij.